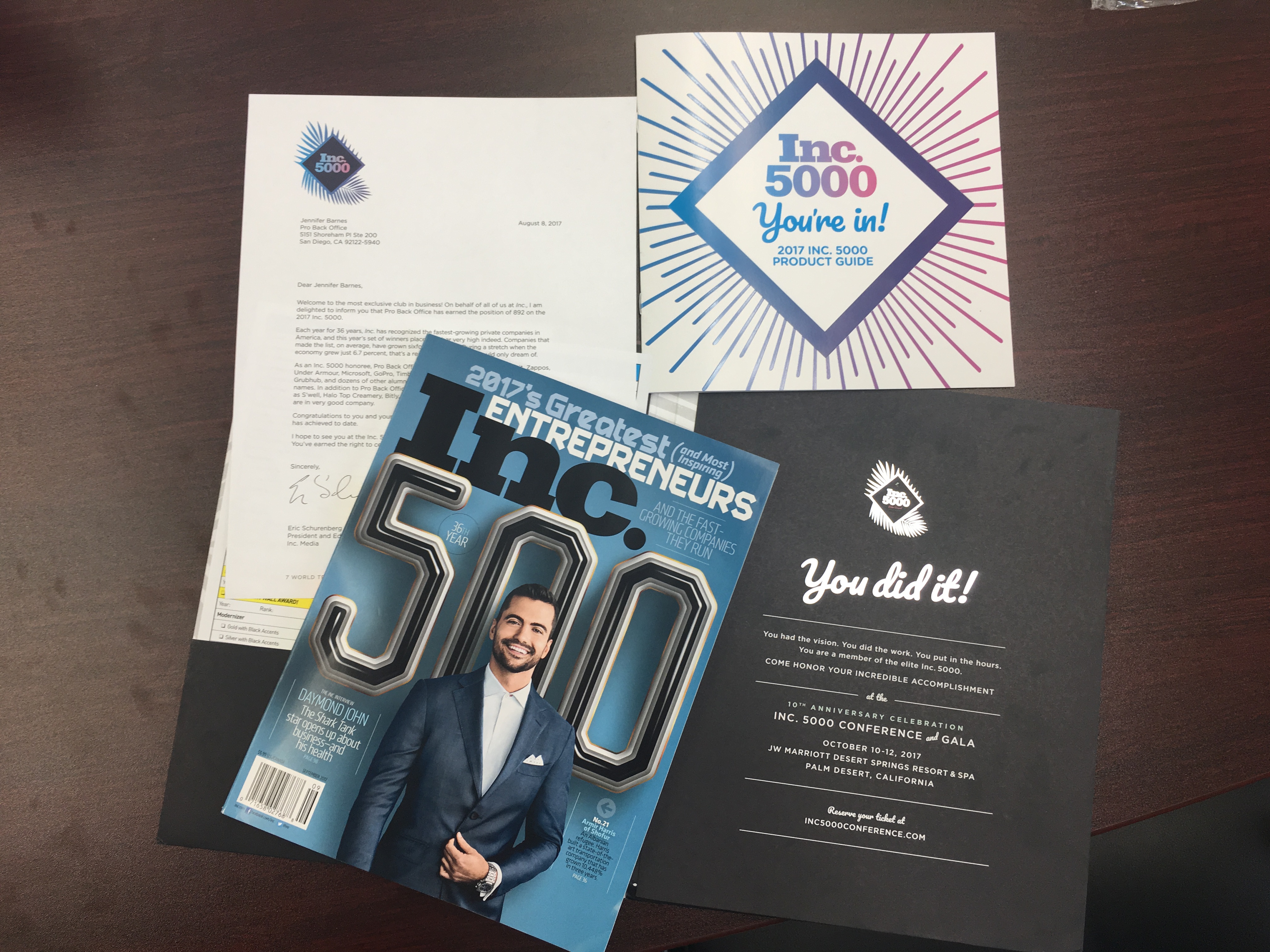 SAN DIEGO, CA, August 16, 2017 – Inc. magazine today ranked Pro Back Office (PBO) NO. 892 on its 36th annual Inc. 5000, the most prestigious ranking of the nation’s fastest-growing private companies. The list represents a unique look at the most successful companies within the American economy’s most dynamic segment— its independent small and mid-sized businesses. Companies such as Microsoft, Dell, Domino’s Pizza, Pandora, Timberland, LinkedIn, Yelp, Zillow, and many other well-known names gained their first national exposure as honorees of the Inc. 5000.

“Pro Back Office has had an amazing year with many accolades from local and now national levels,” said the PBO Executive Team. “Being ranked number 892 out of 5000 companies in the U.S. is an honor. It’s hard to put in to words how grateful we are to our amazing team and loyal customers.”

The 2017 Inc. 5000, unveiled online at Inc.com and with the top 500 companies featured in the September issue of Inc. (available on newsstands August 16) is the most competitive crop in the list’s history. The average company on the list achieved a mind-boggling three-year average growth of 481%. The Inc. 5000’s aggregate revenue is $206 billion, and the companies on the list collectively generated 619,500 jobs over the past three years. Complete results of the Inc. 5000, including company profiles and an interactive database that can be sorted by industry, region, and other criteria, can be found at www.inc.com/inc5000.

“The Inc. 5000 is the most persuasive evidence I know that the American Dream is still alive,” says Inc. President and Editor-In-Chief Eric Schurenberg. “The founders and CEOs of the Inc. 5000 tell us they think determination, risk taking, and vision were the keys to their success, and I believe them.”

The annual Inc. 5000 event honoring all the companies on the list will be held from October 10 through 12, 2017 at the JW Marriott Desert Springs Resort & Spa in Palm Desert, CA. Speakers include some of the greatest entrepreneurs of this and past generations, such as former Ford president Alan Mullaly, FUBU CEO and founder and “Shark Tank” star Daymond John, Dollar Shave Club founder Michael Dubin, researcher and #1 New York Times bestseller Brené Brown, and Gravity Payments’ founder and CEO Dan Price.

The 2017 Inc. 5000 is ranked according to percentage revenue growth when comparing 2013 to 2016. To qualify, companies must have been founded and generating revenue by March 31, 2013. They had to be U.S.-based, privately held, for profit, and independent—not subsidiaries or divisions of other companies—as of December 31, 2016. (Since then, a number of companies on the list have gone public or been acquired.) The minimum revenue required for 2013 is $100,000; the minimum for 2016 is $2 million. As always, Inc. reserves the right to decline applicants for subjective reasons. Companies on the Inc. 500 are featured in Inc.’s September issue. They represent the top tier of the Inc. 5000, which can be found at http://www.inc.com/inc5000.

Founded in 1979 and acquired in 2005 by Mansueto Ventures, Inc. is the only major brand dedicated exclusively to owners and managers of growing private companies, with the aim to deliver real solutions for today’s innovative company builders. Winner of the National Magazine Award for General Excellence in both 2014 and 2012. Total monthly audience reach for the brand has grown significantly from 2,000,000 in 2010 to over 18,000,000 today.  For more information, visit www.inc.com.