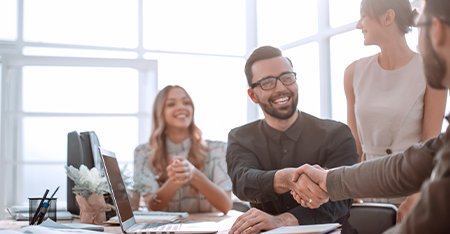 In 2018, when Consulting CFO Scott Palka was asked to assist with the acquisition of client Forecast 3D, we never guessed that the transaction, including PBO Advisory Group’s role in it, would be spotlighted as a demonstrative M&A deal.

We were honored when the Association of Corporate Growth of San Diego asked Scott to be a part of a panel discussion, “Virtual M&A DealStory: When Potential Buyers Talk, Sellers Should Listen”, to give a behind-the-scenes account of how the deal was done.

During the discussion, which also included a lawyer, CPA, and investment banker involved in the deal, as well as our client Donovan Weber who founded Forecast 3D, Scott shared how he and his PBO Advisory Group team contributed to the successful acquisition.

Scott began working with Donovan a few years earlier after Forecast 3D responded to an unsolicited acquisition offer that ultimately didn’t happen. It was clear from that experience that the company needed help in getting its financials in order to consider such a deal in the future. Scott and his crew were brought in to evaluate, clean-up, and prepare financials so that prospective buyers would have a thorough understanding of the company’s earning capabilities.

As Scott noted in the ACG presentation, when he came on board there was no real way to measure profitability. Working with Donovan, one of the projects they tackled was developing a three-year plan with detailed forecasts. When a new, unsolicited buyer came along sooner than expected, the deal moved much faster due to this forecasting, which Scott portrayed as “reasonably tight.”

According to one of the attorneys who worked on the deal, Paul Johnson, the sophisticated buyer reacted well to the forecasting, noting that Scott and his team were also able to respond quickly to requests for additional information, given the work they had already produced.

The Forecast 3D acquisition is one of many that Scott and PBO Advisory Group have handled. Scott’s advice to companies, whether or not you are looking to be acquired, “Always be ready for due diligence.”

This can be achieved by working with financial professionals who can provide you – and potential buyers – with a clear understanding of your historical, current, and future financials.

We’ve posted a more-thorough case study of the Forecast 3D deal here, including all of the hats that PBO Advisory Group wore for our client during the 14-month sale.